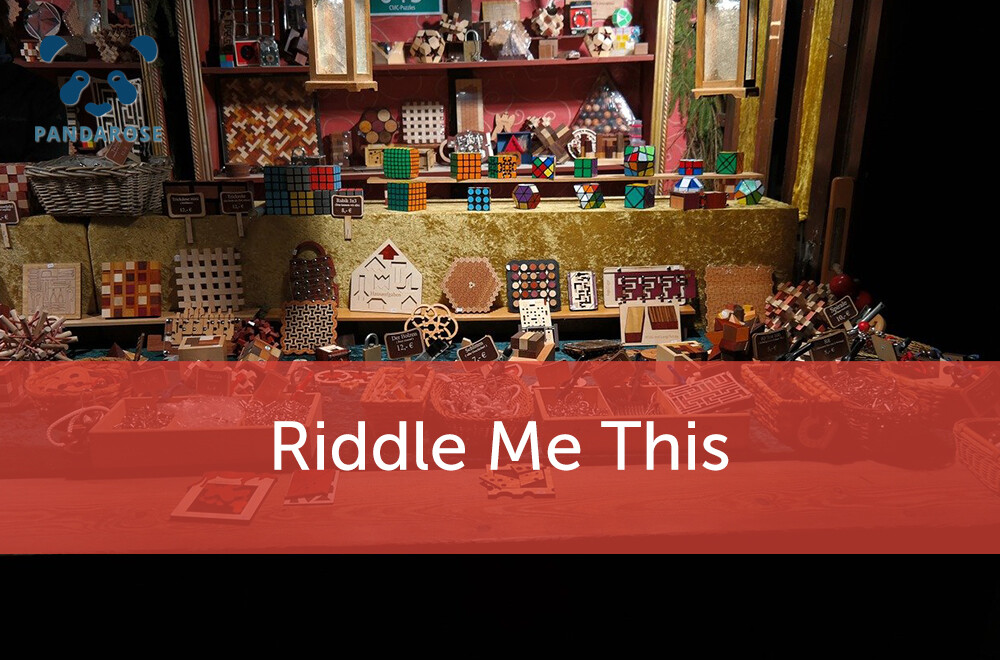 I love a good riddle.  Give me a book of riddles and my productivity tanks as I spend the rest of the day thinking about them.  I love old riddles, new riddles, and I especially love creating riddles.  My wife and I will try to stump each other with riddles for hours and we even created our own riddle game where one of us thinks of a punchline for a joke and the other person has to create the setup.  (It’s great for long road trips.)  But why do we riddle, and what purpose do riddles serve?

A Good Riddle Unites Us

Riddles serve to pull us together.  Throughout human history, riddles have been a part of life.  All cultures have riddles and many have been shared across cultures and languages.  The riddle of the sphinx comes from Greece originally, but versions can also be found from Estonia and even on the Marshall Islands.  This connection with people across cultural and linguistic divides helps us to understand them and to see how similar they are to us. It transforms them in our minds from the Other to the Same. Riddles even bridge the gap of time.  As long as there as been English there has been people telling riddles in English.  But going back to the dawn of written language we even have riddles from the ancient Sumerians.  Here’s an example:

A house based on a foundation like the skies
A house one has covered with a veil like a secret box
A house set on a base like a goose
One enters it blind,
Leaves it seeing.

The answer?  A school.

So in a sense, we ask riddles because we always have, so asking and answering riddles is a part of the human experience.  It unites us across cultures and eras and helps connect us to them.  We can now say that the Sumerians valued education just as much as we do.  All from one short little riddle!  That still doesn’t really answer the question though.  The unity riddles give us is a powerful effect of riddles, but it is only one effect. It is not the purpose behind them.  What is that purpose?

Why Tell A Riddle?

Ultimately, riddles teach us.  Firstly, they teach us essential problem-solving skills when we’re young and they help us enhance those skills when we’re older.  Secondly, sometimes the riddle is trying to teach that the answer might be hidden in plain sight.  Which word in the dictionary is spelled incorrectly?  ‘Incorrectly.’  These sorts of riddles rely on double meaning.  What can travel around the world while staying in a corner?  A stamp.  Some riddles rely on clever metaphors.  The riddle of the sphinx is a classic example.  What walks on four legs in the morning, two at mid-day, and three in the evening?  A person.  No matter what trick the riddle uses, when someone tells you a riddle, you know it’s a trick, indeed, you know the answer MUST be hiding right behind it waiting to be discovered.

There’s an even greater challenge in creating a riddle.  A good riddle is solvable but not too solvable.  If there isn’t an answer, then it’s not really a riddle.  Thus, the thrill of the chase disappears when finding the answer is too easy.  When you create a riddle, you have to solve it yourself without any clues.  You need to figure out what the twist is going to be and then build the riddle around that. Once you know the answer to your riddle, you just have to figure out the question. Consequently, both solving and asking riddles requires creativity and helps us train our brains to think laterally.

The lateral thinking that riddles give us is essential to success in the modern world.  Unexpected problems crop up all the time and they usually require unexpected solutions.  You’ll be better equipped for solving problems if you train your brain in how to think laterally and step outside of the box and wrestling with your problems.  Whether you need to figure out what’s wrong with the code in your program, discover a way to stay under budget in your department, or even find the best angle to chop down a tree, lateral thinking and problem-solving skills are essential for success in life. They enable us to take charge and deal with our problems head-on.

A very real example comes to us from the 19th century.  Less than two hundred years ago, it was a point of professional pride for doctors to never wash their aprons, in fact, a filthy apron showed how experienced they were.  To make matters worse, they’d only wash their hands at the end of the day because they knew they’d just get them dirty again.  The high infection rates in hospitals were attributed to stale air but the real source of the problem was completely unknown even though it was right in front of them.

Along came Dr. Joseph Lister.  He was able to step outside the box of accepted medical practice, and realized that the real culprit was the lack of hygiene.  He gradually convinced others, and the changes he made to the medical industry saved countless lives. Dr. Lister is considered the father of modern surgery.  If he wasn’t able to think laterally, how many more people would have died from easily preventable causes?  The situations we’ll be faced with in our daily lives generally won’t be that dire, but lateral thinking is still just as necessary for us now as it was then.  The thing is, if we don’t keep brains sharp, we won’t even know what problems we’re missing, let alone how to solve them.

As a final thought, I’ll leave you with this Anglo-Saxon riddle from the book of Exeter.

I am an eminent thing, known to nobles,
and I often abide, notorious among the people,
both mighty and poor, traveling widely,

standing a stranger at first
to my friends, a plundering hope—
if I must keep hold onto the profits
or a brilliant good in the cities.

Now wiser men love me the most,
my companionability. I must reveal wisdom
to the multitudes. They never speak there,
any of them across the earth—

Although the children of humanity,
of the land-dwellers, pour over
my tracks, I conceal
my footsteps from every man
at times.